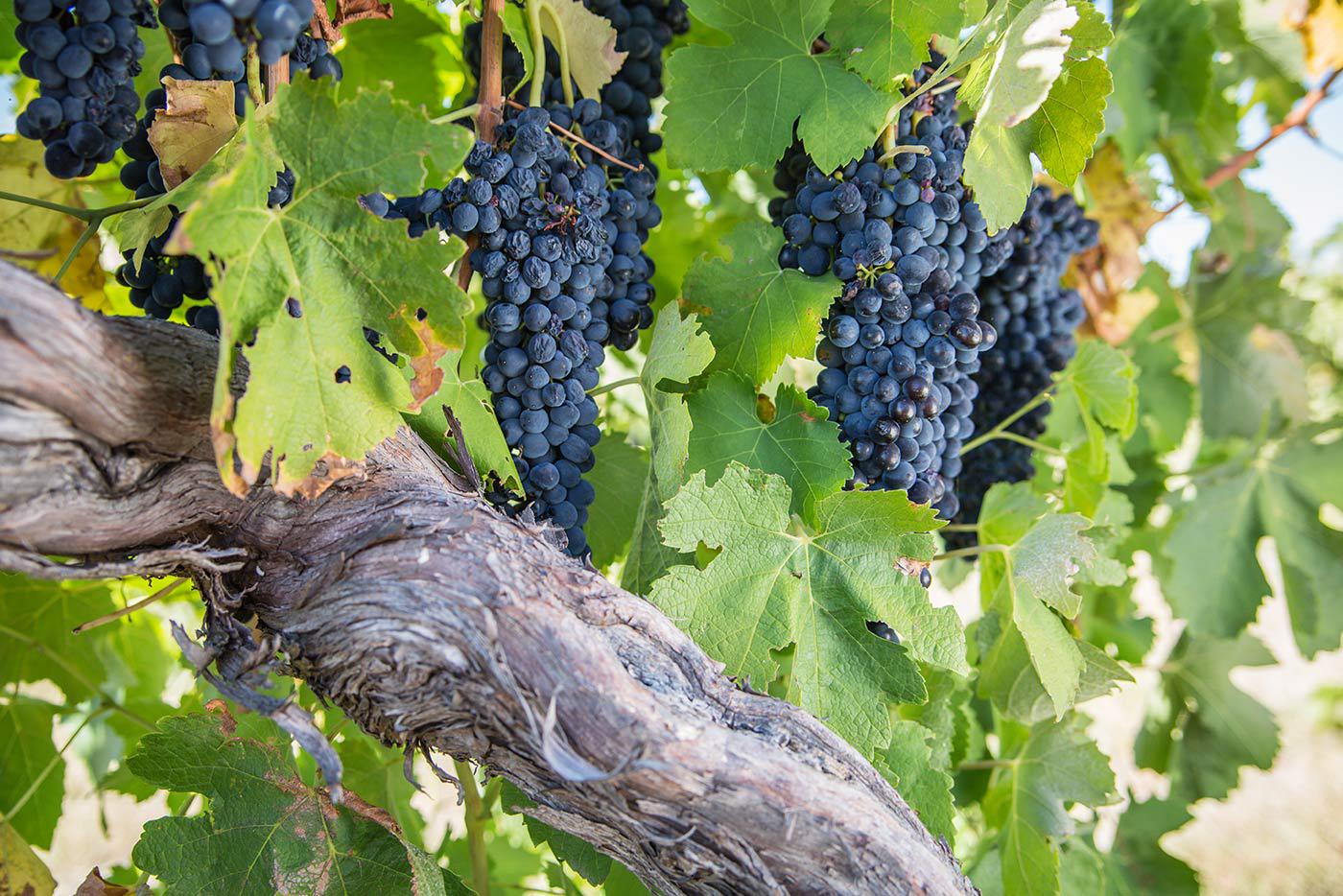 Carmenere Back from Oblivion

Wine Business Magazine discovers that Heathcote is one of the few remaining regions in the world producing carmenere. Here's what they say about the re-discovered variety.

"Ay caramba  noes merlot es carmenere" was the cry that went out around the Chilean wine industry in the mid-1990s when French ampelographer Claude Boursiquot identified that some of Chile's best merlot vines were in fact carmenere vines. This was officially ratified in 1998 and carmenere began its comeback from oblivion. Before then, most Chilean growers used to refer to it as "merlot chilena" because it was somewhat different to "normal" merlot, but they didn't know why.

This ancient native French red variety, which is believed to be distantly related to cabernet sauvignon, had been widespread across the Medoc (Bordeaux) until the outbreak of phylloxera in the 18705. When replanting occurred after the outbreak. carmenere vines were difficult to find and so almost all of the vignerons replaced their carrnenere plots with other easier-to-grow approved varieties So much so that for a long time in the 20th century the variety was thought to be extinct. Today there are only about 20 hectares of carmenere remaining in all of the Medoc. It was one of the varieties approved for use in the area's famous red wines, but now it is almost never used. Incidentally, one of the few chateau still growing and using carmenere is the 5th growth Chateau Clerc Milan in Pauillac. Clerc Milan was the first Bordeaux wine I ever tasted and remains oneof my favourite affordable Bordeaux wines.

The main reason for the virtual disappearance of this variety is that after the phylloxera outbreak in the late 188os, when the Bordeaux area was replanted. it was omitted  in favour of other easier-to-grow vines from other 'permitted varieties' for the region. This was due to the fact that carmenere suffers from poor fruitset which results in unpredictable yields.

The Italians are doing a bit better than the French: they have about 45 hectares of carrnenere, much of which, until recently, was thought to be cabernet franc.

America has about  25 hectares, with almost all of it being used in its 'Meritage' blend -

the name it has trademarked for its Bordeaux style red blends after the French banned the use of the word 'Bordeaux'. Interestingly, the Americans still call their sparkling wines Champagnes despite the screams of protests from the French.The Argentines have about 35 hectares of carrnenere in Mendoza, where again it is used mainly as a minor component in 'Bordeaux style' blends.

However, the Chileans kind of win hands down with a smidge over 8,000 hectares of carmenere, mainly in the regions of Maipo, Rapeland  Colchagua. This makes Chile the contemporary spiritual home for the variety, just like Argentina is for malbec and Australia is for shiraz. Today the vast majority of Chilean carmenere is made into varietal wine so as to exploit the competitive advantage they have with the variety. l:iowever, some of the best carrnenere produced is reserved to be used in small quantities for enhancing their 'Bordeaux' blends.

In China there is a grape variety they call cabernet gernischt, which some people say is in fact carmenere, but there is still doubt about this as others say it is actually cabemet franc. So until there is conclusive proof either way, we will leave it out of information on either of these two varieties. The name carrnenere is popularly thought to be derived from the French word 'carmen' which means crimson, which is the perfect description of the brilliantly flamboyant colour the vine's foliage displays in the autumn.

In the vineyard, Carrnenere is vigorous but not fertile. It likes a long growing season as it ripens late, up to five weeks after Merlot, and produces small bunches of deep blue, medium-sized berries. It struggles in wet conditions and irrigation has to be carefully monitored. It is susceptible to root infestations and so is better suited to sandier soils. It is important for the vigneron to ensure the grapes are fully ripe before they harvest them or the wine will have strong herbaceous and capsicum flavours, as opposed to the red berry, black pepper and sometimes even tomato characters that are present when the grapes are picked fully ripe. So if you come across a carmenere wine that has strong herbaceous or capsicum characters, you will know that the grapes were picked too early. Typically its flavours are fruity but finn, with solid dark cherries, raspberries with spicy tones and some pepperiness.

Australia has a deep-seated desire to try something new in grape varieties -we are the only country in the world to be growing more than 100 (and rising) imported innovative grape varieties as well the 35 classical mainstream varieties.

We already have six or seven wineries growing carmenere, even though it was only rediscovered to the world in 1998. In viticultural terms, our adoption of this variety must be approaching the speed of light. Of

these Aussie producers, Balancing Rock Wines from Wyberba in Queensland's cool climate Granite Belt is growing carmenere but has not yet made a wine from it - watch this space.

There is a small patch of carmenere grown in the Adelaide Hills and another in Mildura, but  neither of these growers responded to requests for samples to be submitted to the tasting for this article.

Humis Vineyard is a small producer from Heathcote, a region best  known for its sensational cool climate Shiraz. They kindly sent samples of their 2014 and 2015 vintages. It was great to be able to see  the difference a year's extra  maturation makes to the wine. Both are drop·dead gorgeous wines: integrated, layered and complex, with the 2014 being just that  bit smoother and  more unctuous as it has mellowed for a little longer. This is a world  class carmenere that would give the Chileans I have previously tasted a good  run for their money.

Also from Heathcote, Brown  Brothers produced its 2015'Cellar Door Release' Carmenere, its second release of this variety. Brown Brothers, since its foundation four generations ago, has been pioneer varietal experimenters with trial plots of a vast  array of varieties, from which they make cellar door release wines of those varieties that  best suit their  microclimate. The wine was delicious with oodles of all the attractive carrnenere characters and a hint  of herbaceousness on the taut, lingering finish. Excellent.

Dell'uva Wines at Freeling in the Barossa Valley produces about 30 different innovative varietal wines, including one of the first (if not the first) carmenere wines in Australia. It is a deeper-coloured wine than the other carmenere in the tasting, with aromas of tomato, spice and coffee that leap out of the glass.The flavours are complex, multi-layered and super smooth with the characteristic tight, lingering finish. An awesome world-class wine that will live for a long time.

Given  how few wineries are making carmenere in Australia, they  are batting at 100 percent -with every  wine tasted being outstanding despite variables such as climactic conditions, the youth of the vines and  winemaker stylistic differences.

So how do these Aussies who have just jumped out of the blocks with  the variety compare to the Chileans who have been growing it for up to a century?

Chilean carmenere is hard to find in Australia.Of the five Chilean carmenere listed on Dan Murphy's website, only two were available in store. I selected 2014 Concha Y Toro Casillero del Diablo (Devil's Chair) from  Valle Central as being representative of Chilean entry-level carrnenere. It was a great carmenere starting point  at $12 a bottle and had all the major characteristic of the variety: medium depth colour, lively aromas of raspberries, spice and a hint  of coffee. On  the palate it was lightish­ bodied but with good depth of flavour, smooth, with a tight, lingering finish. It is a really good way to test drive basic Chilean carmenere to see what  the variety is all about.

I managed to source a sample of Queulat 2013 Ventisquero Single Vineyard Miapo Valley from Chile from an  independent bottle shop, and  it was a step up from  the Casillero del Diablo. It had  more depth of flavour, more complexity and some lovely smooth, rich tomato type characters with just a hint  of capsicum. It finished quite tight and cried  out to be enjoyed with food. Pretty darned good.